This is the companion field guide to the Uranometria 2000.0 Deep Sky Atlas
The Deep Sky Field Guide answers these questions: 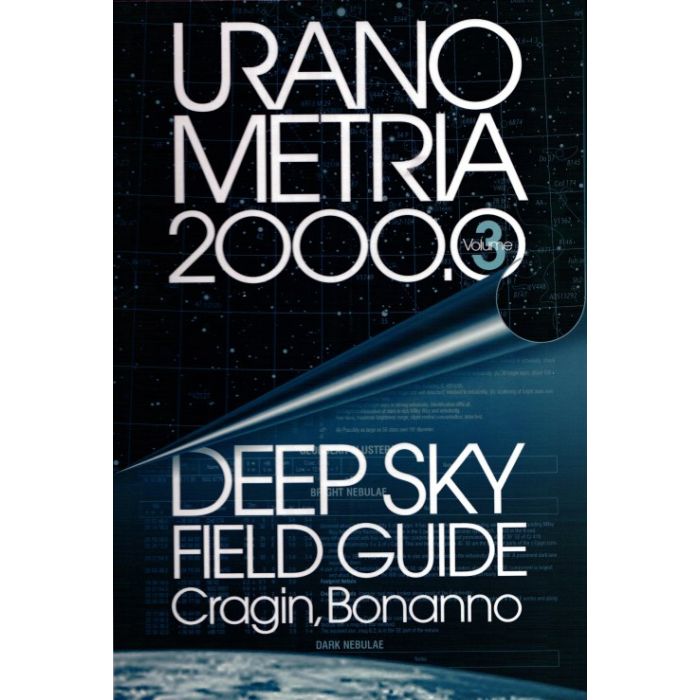 Uranometria 2000.0 Deep Sky Field Guide expands and enhances the Uranometrial 2000.0 charts by providing precise data as to location, size, orientation, magnitude, type and much more on non-stellar objects, makin your time out under the stars far more productive.

Serious observers know that the more they know about an object the better their observing experience. An atlas can give you postion, relative size and possibly a rough idea of its shape but that might not be enough to locate it.

Take galaxies for example. A galaxy might be quite large but you could have difficulty in locating it if its surface brightness is really dim. Or perhaps is is edge-on— even bright ones like this are sometimes hard to find. To get around these problems we created the Deep Sky Field Guide to Uranometria 2000.0.

Uranometria 2000.0 Deep Sky Field Guide expands and enhances the Uranometrial 2000.0 charts by providing precise data as to location, size, orientation, magnitude, type and much more on non-stellar objects, makin your time out under the stars far more productive.

Almost 90% of the objects have accompanying notes. This data is provided for each map and by object type, and is fully indexed (more than 30,000 entries). This volume is a must-have for the serious observer. The below two-page spread shows the data that matches Map 94 shown above.

Where did the name Uranometria come from?

To the ancient Greeks, Urania was the Muse of the Heavens, and uranos was the word for the sky. In 1603, when Johann Bayer published his epochal atlas he named it Uranometria, and it became to celestial mapmaking what theGutenberg Bible was to printing. For its era, Uranometria set an unprecedented and highly-advanced scientific, graphic and artistic standard for star charts. Nearly 400 years later, in 1987 we published to universal world acclaim Uranometria 2000.0 which along with the advent of inexpensive modern telescopes revolutionized deep sky observing.

During the 1990s we began the process that has culminated in a greatly expanded second edition. Telescopes were getting bigger, amateurs were imaging the sky with super-sensitive CCD cameras, and a new deep-sky atlas was needed. The data upon which to build this atlas had to be better than anything on the shelf.

Emil Bonanno created software to allow us to visually inspect the position, size and orientation of deep sky objects against the Digitized Sky Survey and where necessary, correct and flawlessly record the data. Using Bonanno's software over a period of several years, Murray Cragin created a unified database of more than 30,000 deep sky objects. Even though Cragin started with the very best professional data available literally tens of thousands of corrections, large and small, were made. Never before has a large-scale atlas been based on such accurate data. Next, Will Remaklus and Wil Tirion took that data and created superb maps of unsurpassed accuracy and beauty. The result is that when you point your telescope to an Uranometria 2000.0 object, you can be assured it will be there, and at the size and orientation plotted. No other large-scale atlas has this attention to detail, nor anywhere near as many objects—by a factor of 3! That's 20,000+ more objects.

More Information
Reviews
Write Your Own Review
Only registered users can write reviews. Please Sign in or create an account
Related Products
Check items to add to the cart or
Logo Copyright Firsthand Discovery, LLC 2011