Be the first to review this product
$59.95
In stock
SKU
8790943396989
Add to Wish List Add to Compare
Email
Optical Testing — A Practical Introduction for Scientists, Engineers, Optical Designers, Students and Optical Workshop Personnel is written for those working in optics with a practical introduction to optical testing methodologies, instrumentation, and procedures, and assist in the development of their professional careers. No optical component or system should be built without a prior specification which defines base parameters, tolerances, and system performance. Optical testing is done to verify whether the specification and performance criteria have been met. Customers need to make sure that they get what they pay for. Providers are bound both by moral and contractual obligations to provide what the customer ordered at the price quoted. Thus, the need for optical testing is incumbent upon both sides of the transaction, and both should have sufficient testing capabilities to validate the resulting optical product.
Skip to the end of the images gallery 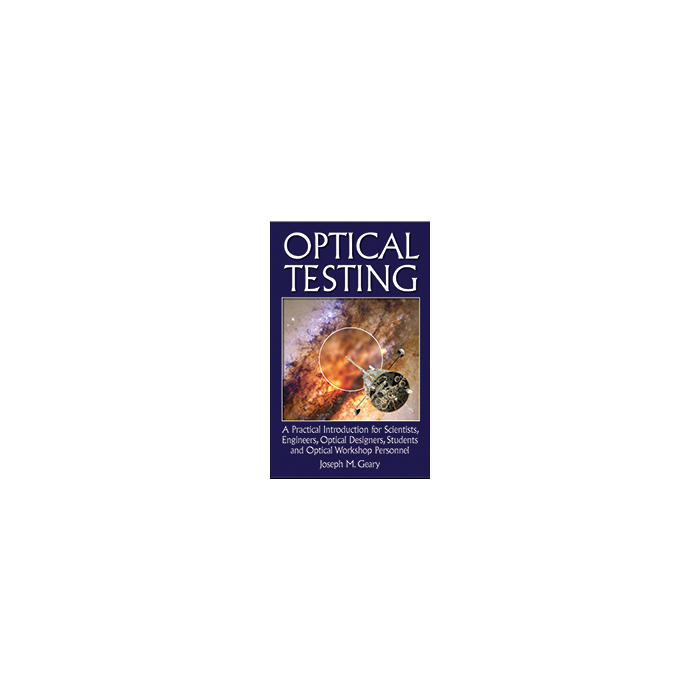 Aberrations determine the amount of detail that can be observed in the image. High quality imagery is of little value unless sufficient power or energy reaches the sensor. This is where basic radiometric concepts are introduced, particularly as applied to lens behavior. Power-related measurements such as lens transmission, relative illumination falloff, and veiling glare are discussed. Image formation is accomplished via glass and/or mirrored surfaces that are curved (spherical for the most part). Consequently, it is important to be able to measure the basic parameters of refractive index and radius of curvature. Depending on the application, test objects observed with the imaging system could either be finite size resolution targets or point ‘star’ sources.

The aberrations measured on an optical bench are recorded as image plane coordinates, i.e., axial and lateral displacements relative to a reference location. But aberrations can also be described in the exit pupil in terms of wavefronts. Hence the book also explores aberrations as described in the pupil and how pupil aberrations are connected to the point spread function. Then the phenomenon of interference is introduced (with a practical application involving the measurement of optical windows).

The specific property carrying information about pupil aberration is the optical path difference (OPD) between a reference wavefront and the aberrated wavefront. Interferometry is the methodology used to measure OPD. Variations in OPD are presented to the metrologist as fringe patterns which must be reduced and analyzed to extract aberration content.

The reality of pupil aberrations is visualized next through the auspices of the point diffraction interferometer, with an industry workhorse, the Fizeau interferometer, described and its operating principle discussed in some detail.

Using the Fizeau as our principle metrology instrument we examine a broad range of test configurations for measuring a wide variety of optical components and systems — mirror flats, spheres, aspheres, and Cassegrain telescopes. The main asphere of interest is the parabolic mirror (both on- and off-axis). The latter also includes an in-depth discussion of the null lens. Test configurations for refractors such as singlets, and multi-element camera systems are considered. Testing non-rotationally symmetric optics such as rectangular aperture cylindrical lenses and mirrors is reviewed. Alternative interferometer types such as the Twyman-Green are also examined. Finally, an exploration is made of the Fizeau interferometer as an imaging system in the context of a null lens test.

Once fringe patterns have been acquired they need to be reduced to provide salient information such as peak-to-valley, rms wavefront, and aberration content. Both manual and automatic techniques are discussed. Interferogram analysis via phase shifting is introduced. Shop tests of optical surfaces via the use of localized fringe techniques (test plates) are reviewed. A reflection from a thin parallel glass plate broaches the topic of multiple ray interference.

Next, numerous indirect aberration measurement techniques are explored. Included are the classical knife-edge test, lateral shear interferometry, the Hartmann and Shack-Hartmann test. The use of a radiometric technique known as the axial intensity (or Strehl) scan is also explored.

The effect aberrations have on image quality of finite scenes can best be described by use of the modulation transfer functions (MTF). The basic MTF concept is introduced and expanded with the help of Linear Optics and Fourier Optics analytic approaches. Various MTF measurement methods are examined, including slit and knife-edge scan techniques. Also discussed is a radiometric approach known as pupil auto-correlation. For telescopes such as the Cassegrain the MTF is also influenced by light scatter from mirror surfaces due to micro-roughness. Consequently, the measurements of surface roughness by both direct and indirect methods are discussed.

Up to this point the book has concentrated on making measurements on optical systems using light based instrumentation. It concludes with a discussion of direct measurements on light fields themselves. Included are discussions on wavefront sensors, polarization and coherence, and broadband and spectral radiometrics.