Annals of the Deep Sky: A Survey of Galactic and Extragalactic Objects Volume 1

Be the first to review this product
$24.95
In stock
SKU
9781942675006
Add to Wish List Add to Compare
Email
Covers Andromeda, Antlia, Apus, and Aquarius plus Introductions to Basic Astronomy and Astrophysics.
Skip to the end of the images gallery 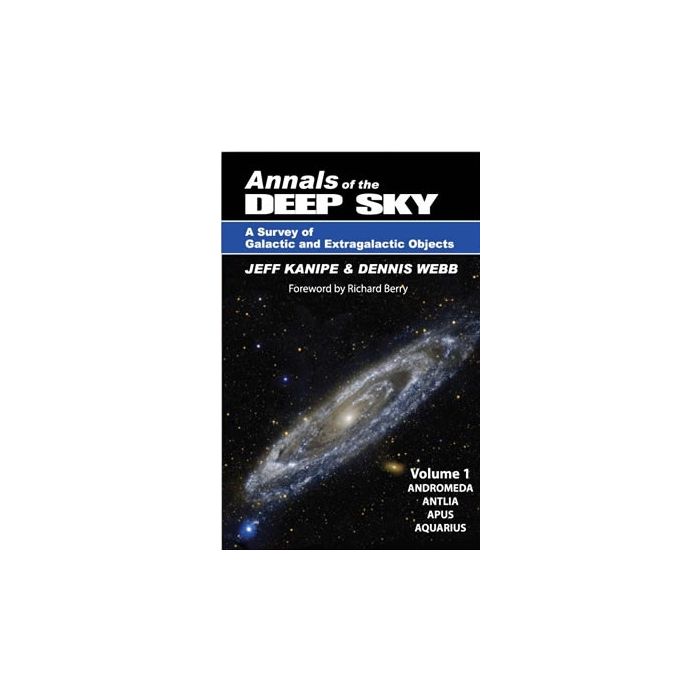 “At last: the sky guide we’ve been waiting for! Annals of the Deep Sky melds through-the-eyepiece observing with up-to-date 21st century astrophysics. Its highly readable format should appeal to observers and non-observers alike. .....[It] operates at many levels. To the novice, it provides guidance and inspiration, offering both basic background and knowledge to grow with. It provides enrichment for established amateurs, pointing out new directions to pursue. And it offers an up-to-date, one-stop astrophysical reference for advanced observers who aspire to contribute to science.”

Annals is by far the most up-to-date and comprehensive observing guide available today, featuring in-depth astrophysical profiles of the major stars and deep-sky objects by constellation. Volumes 1 and 2 cover the constellations Andromeda through Caelum. When completed, the series will cover all 88 constellations.

“We developed Annals to enhance and cultivate the interest of the hundreds of thousands of amateur astronomers worldwide,” says Colorado-based science author Jeff Kanipe, who is writing the text for the new series. “Many of them actively observe with telescopes, while others prefer the comfort of the armchair, but both are driven by a sincere desire to understand the universe. Our goal is to provide extensive, noteworthy background into stars, clusters, nebulae, galaxies, and galaxy clusters — not just pithy descriptives of what they look like in a telescope. Some of the objects we profile, like the Andromeda Galaxy, are well known, but others not so much — but should be. We think each has an interesting story to tell.”

Annals is the first series to integrate the latest observational discoveries with the most recent astrophysical research. Each profile of a celestial object effectively provides a unique tutorial on some aspect of astrophysics, from how stars are born to why galaxies look the way they do.

Annals also draws on the extensive history of astronomy to put today’s skywatchers in context with the rich lineage of past discoveries that trace how astronomers came to understand the nature of the objects they observe.

Innovative diagrams created by retired NASA engineer and manager, observer, and graphic illustrator Dennis Webb, in turn, augment the text. Virtually all of them display multiple layers of scientific information in a neat, uncluttered format. For instance, the binary star illustrations (see "Representative binary star orbits" nearby) depict not only the locations of the components but also how they orbit one another and travel through the sky in three dimensions. Every object with intriguing structure is accompanied by one or more intuitive illustrations that show detail, often at several scales, in many cases from large terrestrial and orbiting observatories.

“In some cases, we ‘deconstruct’ galaxies and nebulae,” says Webb, “with images at different wavelengths, revealing the elements of structure, so important to making sense of these distant mysteries. Illustrations or images images often accompany these deconstructions, relating what the amateur can observe to the latest discoveries, encouraging all amateurs to try to push past conventional limits on observing.” See illustration at right for an example.

The series was inspired by the authors’ affection for Burnham’s Celestial Handbook, a three-volume guide published in the 1970s that is still a popular reference. But today, amateur astronomers have become sophisticated in ways that could only have been imagined in Burnham’s day. They have access to larger, more affordable, telescopes, computer-driven mounts, better optical designs, digital and CCD cameras, spectrographs, and photometers. This new frontier has motivated many amateurs to move from merely chalking up the celestial objects they observe to understanding the nature of what they are seeing. In fact, there exists a large cadre of “semi-professional” amateurs who regularly contribute their observational and imaging talents to the science.

Whether a beginner striving to advance their observing skills and knowledge of the universe, or a “semi-pro” with years of observing experience Annals of the Deep Sky will greatly enrich their celestial endeavors.

Jeff Kanipe and Dennis Webb first teamed up to write and illustrate the highly acclaimed The Arp Atlas of Peculiar Galaxies: A Chronicle and Observer’s Guide in 2006. Jeff has worked as a science writer and journalist specializing in astrophysics and cosmology for almost 35 years. His work has appeared in outlets including Sky and Telescope, Astronomy,StarDate, New Scientist, Nature, The World and I, SPACE.com, and Earth & Sky. He has authored or coauthored numerous books. Asteroid 84447 Jeffkanipe is named in his honor for his role in identifying the earliest known image of that asteroid. Today he observes from his home in Colorado.

Dennis is a retired NASA engineer and manager who held leadership roles for the International Space Station and Constellation programs. He has been an observer for more than 25 years starting out with a pair of binoculars in 1989. In 1996 he built a 17.5-inch Dobsonian telescope and in 1997 began imaging with a home-built astronomical CCD camera. While he always knew that he harbored artistic instincts, they blossomed after he discovered the power of Adobe Photoshop and Illustrator.

More Information
Reviews
Write Your Own Review
Only registered users can write reviews. Please Sign in or create an account
Related Products
Check items to add to the cart or
Logo Copyright Firsthand Discovery, LLC 2011