Here are some of the topics covered in this book:
•Deciding what size telescope will suit your needs
•Ordering optics for a large Dobsonian
•Understanding plywood and how to use it properly
•Making a flotation cell to support the primary mirror
•Figuring how long to cut the poles for the truss tube
•Constructing precision truss tube sockets
•Performing torque analysis for first-time balance
•Installing precision digital setting circles
•Setting up and taking down the telescope
•How to collimate your optics correctly 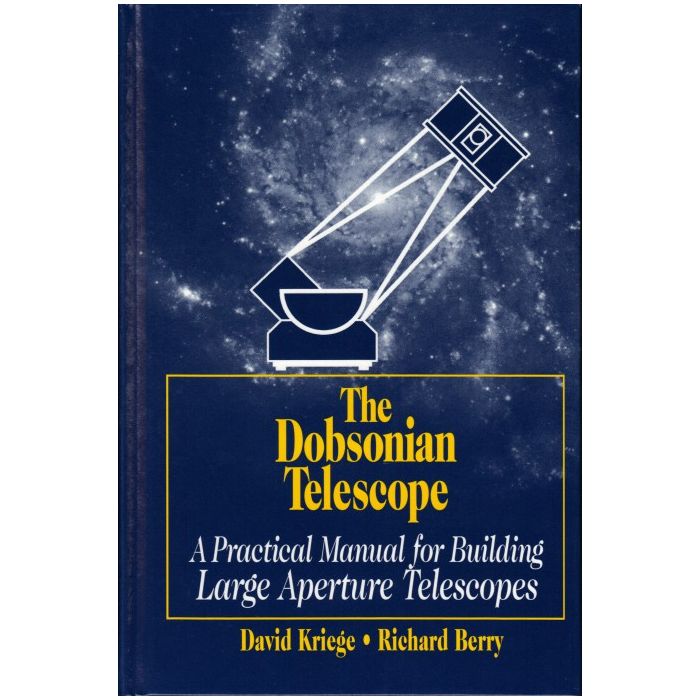 The Dobsonian Telescope, A Practical Manual for Building Large Aperture Telescopes tells how you can build a state-of-the-art Dobsonian telescope using readily available materials and supplies. Every step of construction is detailed in photographs and diagrams, and the underlying ideas are carefully explained. As a result of this three-year collaboration between authors David Kriege and Richard Berry, experienced and well-known telescope makers, you now have the opportunity to build a high-performance telescope from 14 inches to 40 inches aperture based on the thoroughly tested designs described in this book.

The Dobsonian telescope takes its name from the astronomer/philosopher John Dobson, who introduced the concept of inexpensive, large-aperture telescopes to astronomy. Amateur astronomers at the time were so amazed that a telescope built from simple, inexpensive materials performed so well that they could hardly believe their eyes. As home-built Dobsonians started showing up at star parties across the nation and people saw what Dobsonians could do, the word spread. In just a few years, the Dobsonian revolution swept the world.

Since those early telescopes, Dobsonians have improved dramatically. An entire generation of amateur telescope makers contributed their best insights and refinements to Dobson's original design. Today's Dobsonians are larger, lighter, and more precise than ever before. For example, it is possible to build a telescope of 20 inches aperture that is compact enough to transport in a hatchback automobile, yet takes only ten minutes to set up at a remote, dark-sky observing site.

Deep-sky observers especially appreciate Dobsonian telescopes. With the 20-inch (50 centimeter) aperture that the authors recommend for first-time Dobsonian builders, hundreds of globular clusters, thousands of nebulae, and tens of thousands of galaxies are visible through the eyepiece. Planetary observers have discovered that from good observing sites, Dobsonians deliver breathtaking performance on the moon and planets. For the casual stargazer, familiar objects like the Hercules Cluster, the Great Nebula in Orion, the Lagoon Nebula, and the galaxies of the Virgo Cluster are an entirely new experience.